Click on the picture below to hear this young lady’s story of how keeping her cell phone in her bra for 4 years caused breast cancer and Dr. Oz’s response telling women to take their cell phones out of their bras. 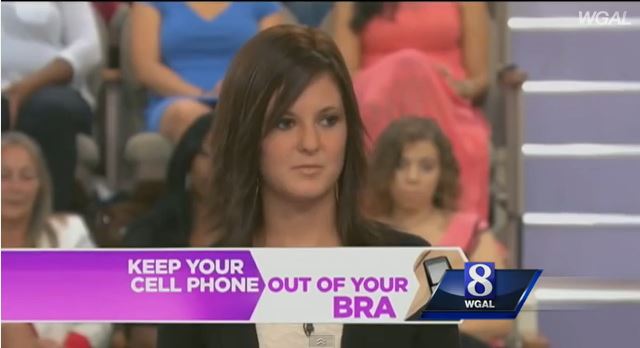 Similarly, guys should use a cell phone protector and keep their cell phones out of their pockets. Studies have shown reduced fertility from cell phones.

About a week ago, my friend Pat (not the yong lady pictured above) came to see me. She’s a great keyboard musician and a born salesperson. Two years ago, she had a tumor. Thankfully, it was benign and the doctors were able to operate and remove it.

Pat had seen cell phone radiation protectors a week before our meeting. It was then that she realized her tumor was in the exact spot where she held her cell phone to her ear 8 hours a day when selling.

The World Health Organization warned such cancers could be caused by cell phone use in May 2011.

A 2009 review of 11 different published studies of people with 10 years of cell phone use found they had double the risk of having a brain tumor on the same side of the head as they held their cell phone.

The protector above is made of special ceramics and conductive materials to absorb and eliminate harmful electromagnetic waves to prevent 99% of harmful radiation from affecting your brain by entering through your ear, therefore shielding you and preventing the danger of electromagnetic radiation from harming you. It allows you to use your wireless phone safely and will not change the appearance of it. It works on any phone and will not affect the quality of reception. It can and should be used on cordless phones, blue tooth headsets and smart meters.

And not just cancer. Cell phone radiation is like a low-powered microwave oven.

“What microwave radiation does … is similar to [cooking] food in microwaves, essentially cooking the brain,” said Keith Black, MD, and Chairman of Neurology at Cedars-Sinai Medical Center in Los Angeles. “So in addition to … development of cancer and tumors, there could be a whole host of other effects like … memory function [from cell phones]….”

Cell phone radiation has been linked to such problems as:

But Pat didn’t need to read these studies. She purchased some of the protectors, tried them and felt better right away. That gave her first-hand proof.

(By the way, if you need to see more studies to be convinced, see this page!)

When I heard her story, I have to tell you I was skeptical, especially when I saw what was available on the Web. Prices ranged from $10 to $350 for everything from stickers to pendants and jewelry. How could all these different things actually do the same thing?

Pat’s favorite radiation protector is a device that uses the wiring of her home to protect from any devices plugged into the wall as well as protect from outside EMF radiation coming into the home like smart meters. So, I decided to call the company to find out how this could be.

The Whole House Home Shield pictured above fits into any electrical outlet to re-tune the wiring to protect from EMF (electromagnetic force) radiation from any device plugged into the wall, including computers, microwaves or appliances. It also prevents outside EMF radiation from getting into your house. Any wireless device inside the house not plugged into the wall, such as a laptop, tablet, or wireless router, requires a separate cell phone radiation protector. One Home Shield will protect home or office buildings up to 5,000 sq ft. (NOTE: The color may be yellow, orange or gray, whichever color we receive from the manufacturer.)

The person at the company I spoke to explained that the founder and CEO was an engineer with experience in handling toxic landfills. On a project, he discovered that some paramagnetic minerals neutralized chemical and radioactive waste due to the natural EMF it possessed.

Later, he decided to see if these minerals would also handle harmful radiation from cell phones and other electronic equipment. He found that It did!

So, he took these minerals ground them very finely (less than the width of a human hair), mixed them in printer’s ink and was able to “print” with them on a sticker. He then patented his process.

The amount of the minerals needed is quite small and that explained how plastic or metal pendants and stickers could all work: you only needed to put some of these minerals in the object and it was effective.

The Home Shield works the same way protecting you and your loved ones from devices plugged into the wall within the home and EMF (electromagnetic force) radiation attempting to enter your home from outside. It does not protect from wireless devices (cell phones, smart meters, wi-fi devices, wireless routers, laptops, etc.) inside the home. Each one of them needs its own protection sticker.

Protect yourself and your loved ones from cell phone radiation.